Well, I’ve got a Lenovo Yoga 730-15IKB Laptop (ideapad) – Type 81CU on Windows 10 Version 2004 (OS Build 19041.530). The issue is, almost every time I install an update either for Windows 10, or sometimes even something from Lenovo, it breaks my fingerprint reader driver (the title of this post). I spent a little bit of time looking for fixes when it first broke, to no avail, and I’d read enough articles online to realize there was not an easy fix. So I resolved myself to a useless fingerprint reader … for a while.

Then one day, I had some extra time on my hands and was fed up with having paid for a fingerprint reader and not being able to use it. After some in-depth research and not believing that a cable inside my laptop needed to be re-seated (some articles specify that this is the problem), I ran across an article that told me to go to here and search for “USB\VID_06CB&PID_0081” and grab the latest driver from that Microsoft site and install it. Well, voila! It worked … for a while, until the next Windows update came along. Then I was back to square one, where nothing worked. Then, I got an idea.

I downloaded the latest/last 3 driver sets from that Microsoft catalog site and systematically installed each of them one at a time following the steps described below. Nothing worked right away, but then I discovered that those drivers are directly related to Intel’s “Intel® SGX AESM” service (aesm_service.exe in Task Manager, Details view). Knowing that, these are the steps I take each time something breaks the driver:

At this point, usually on the second or third driver/attempt, I have found one that works! You can reboot your computer now if you so desire, it should keep working. Sometimes I have found that it is not working after a reboot, but if I disable the “Synaptics WBDI – SGX” in device manager and enable it, it then starts working again, or sometimes I have to disable it, kill the “aesm_service.exe” process in task manager and wait for it to restart itself again and then enable”Synaptics WBDI – SGX” again.

Just as an FYI, what is currently working for me is the “5.5.2735.1050” version of the driver (which is the second most recent version when sorting by “Last Updated” on the Microsoft catalog site). I know it’s a bit of a chore, but at least I’ve got my fingerprint reader back again and it seems to keep working until the next major update! Hope this is helpful to someone else.

OK, so I’ve been using Outlook for YEARS (many) and I have two HUGE PST archive files (I’m an email hoarder and I admit it).  One is 1GB and the other is 4GB.  They work fine in Outlook (2010) of course and I can peruse them at will.  I recently decided to ditch Outlook because our corp. switched to Google and as good of an idea as Google App Sync is, it stinks in keeping my Outlook email properly synced with my GMail (no matter what I try).  I hate Google’s web mail interface with a passion, so I wanted to look for an alternative email client.  Yes, I know that Outlook can do IMAP and that this would probably get rid of my syncing problem, but in this process I discovered just how proprietary Microsoft’s PST format is – and of course that set me off.

Enter Thunderbird … the awesome, open source email client with features and add-ons galore!  It works great for everything I needed except one thing … it can’t import an Outlook PST file.  After quite a bit of searching the Internet, and a lot of trial and error, I found that there are extremely few free and fast ways to convert an Outlook PST file into something “normal”.  Since I have over 100,000 emails (yes, you read that number correctly) in my PST archive files, it is no easy (or quick) task to convert them.  Everything I tried was either going to take literally hours to days or just plain was not going to be free.  Well, being the type of person that I am, I had to find a fast, free way to do this.  Here is the solution that is working (even as I type this) for me (it has already converted over 10,000 of my emails in a relatively short amount of time):

This was the fastest method I could find to do this.  It exported and imported thousands of messages in minutes.  I’m not going to go into all of the other methods that I tried, but suffice it to say that literally hours into one method with only about 5000 messages imported, I hit Google’s relatively undocumented IMAP throughput wall, which intentionally killed my IMAP connection and thus the entire process (what a grand waste of my time)!  If you have thousands upon thousands of email messages in a PST that you want imported into a more “normal” email program like Thunderbird, this is the fastest, free way to do it in my humble opinion.

Well, I’ve searched high and low, on many different occasions, and over a long period of time with no good/working answer to this one.  I have a MacBook Pro (so real Apple hardware) with Boot Camp (Windows 7) installed on it, and I have been trying to basically do what VMWare Fusion does in reverse, but with VirtualBox (i.e. run my Mac in a VM from Windows 7).  It used to work just fine with Snow Leopard, but then Apple “updated” to Lion, and no more.  I have read so many people suggesting KEXT fixes, SATA fixes, USB fixes, etc., etc. and NONE of them have worked for me.  My understanding is that apparently the new OS X flavors now detect that the HD is “locked” somehow (by Windows I assume), and will not allow access to it, even though OS X is on a different partition.  So no matter what I try, I cannot access my RAW Mac disk partition with Virtualbox and OS X at the moment.

Out of sheer frustration with not being able to run my native Mac in a Windows window the way I used to, I finally decided to install Mountain Lion (no, I have not “upgraded” to Mavericks yet) to a USB drive and run that in a Windows window via Virtualbox (and if you have to ask why on Earth I would want to run my Mac in a Windows window in a VM, you either should not be reading this or should go and reboot your Mac 100 times in succession and report back as to how fun that was).  It installed and ran without a hitch … until today, when, for the first time, I re-fired up the Mac Virtual machine.  Guess what I was so privileged to see?  Yep!  That good ol’ “still waiting for root device” message again.  I just about burst a blood vessel!

Knowing what I had learned thus far, I thought, “hey, maybe because Windows had grabbed that drive (it had a drive letter), OS X can’t get at it, just like my internal HD”.  So I first ejected it from Windows, which was pretty stupid, because then Virtualbox could not see the drive either.  So I plugged it back in, and then simply told Virtualbox that it could have it exclusively via right-clicking on the USB devices icon and then clicking the checked line shown below in the photo (accessed via a right-click of the mouse on the icon, and then a left-click on the checked line (which will currently be unchecked)).  Voila!  My Mac VM booted!  I have not read of this being the solution anywhere online, so I thought I’d post about it.

Unfortunately I don’t believe there is a similar way in Virtualbox to tell it that the RAW device partition that I have assigned to my Mac Virtualbox VM, can be exclusively for Virtualbox, as I believe that would also solve my internal HD Mac booting woes.  So why/how did this work in Snow Leopard?  I have no idea.  Oh well, at least I have a work-around for the interim…

P.S.  In order to make my mouse work, since “VirtualBox does not provide Guest Additions for Mac OS X at this time“, I had to do the same thing with the mouse and allow VB to have it exclusively (which made it really fun trying to get the mouse back into Windows – host key + “home” key, and then use the keyboard and select it again from the menu).  Something else that was handy was increasing the Mac screen size in VB.

Did you know that you can easily create a blog post in Word 2010 and simply publish it to WordPress?  Read on if you’re interested.

We use a Word template to create our newsletters.  Once we have finished our “normal” newsletter in Word, I create a new “Blog Post” in Word 2010.  Then I simply highlight our entire “normal” newsletter and copy and paste it into the new, blank blog post in Word.  I can then simply hit the “Publish” button in Word (you’ll have to provide proper login credentials to your blog site the first time) and publish our latest newsletter to our WordPress blog!  It doesn’t get much easier than that.  Check out the screen shots below if you’re curious… 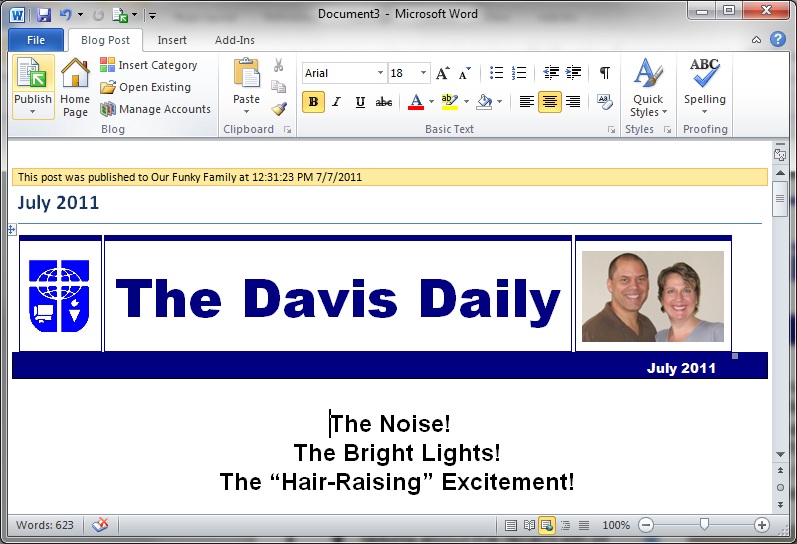 Below is my multi-day adventure into cloning my (BootCamped) Mac’s HD onto a larger HD.  I hope this is helpful to someone other than me, as nothing I tried that I found via online searching worked.  This apparently is not nearly as straight-forward as it probably should be, unfortunately.  Not TrueImage, DiskDirector, CopyCatX, VolumeWorks, CampTune, or GParted (or any combination of those that I tried) worked for this.  I’m going to outline the process that I did to get this to work (you’ll need both the Windows 7 and Mac OS X install DVDs, not to mention a couple of blank CDs to burn):